Over the past few years, Disney has dominated the big screens with live-action versions of our favorite classic tales—Beauty and the Beast, Alice In Wonderland, and The Jungle Book, to name a few.

Their latest cinematic venture is a brand new adaptation of AladdinÂ featuring an all-star cast. The most recent trailer for Aladdin dropped on Sunday and people are having some strong opinions about the genie.

Sunday night, an all-new trailer dropped for DisneyÂ’s live-action Â‘AladdinÂ’ coming this May.

“Your life begins now... Aladdin”. Watch this special look at Disney’s #Aladdin, in theaters May 24. pic.twitter.com/6kgsmxUtam

The trailer gave fans a first look at many of the storyÂ’sÂ iconic characters including the genie played by Will Smith. 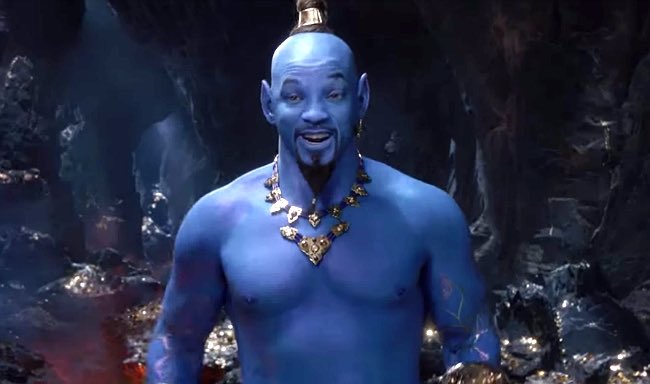 And it wasnÂ’t long before Twitter began roasting the hell out of SmithÂ’s look.

Will Smith genie is what appears in my room when I have sleep paralysis pic.twitter.com/NzMDOgvkkz

“It’s cause you be on that phone” pic.twitter.com/BdLh5Q8UVg

"you ain't never had a friend like me georgie" pic.twitter.com/WVj0xiox9F

Will Smith as Genie in Aladdin(2019) pic.twitter.com/ZVkfr4ViHD

This looks like a blue version of Shrek. #Aladdin pic.twitter.com/7xCEg46WvS

i'll never sleep again and it's all will smith's fault #aladdin pic.twitter.com/wUL79ZchIG

Was down for that #Aladdin trailer the whole way thru til I saw blue Will Smith. pic.twitter.com/bSBf02ul2c

How dare Will Smith play a genie and take away acting work from actual genies. pic.twitter.com/bJCGiwcYGc

First look at Will Smith as the Genie in the up coming live action Aladdin pic.twitter.com/yFLxrVJXv2

The internet reacting to Will Smith’s genie pic.twitter.com/gK6ginlrxQ

Will Smith as the genie looks like what one of those kids from the 90’s Fruit Gushers commercials would look like if they never found a cure for their fruit curse.

Why does Will Smith look like smurf centaur?! What kind of genie?!